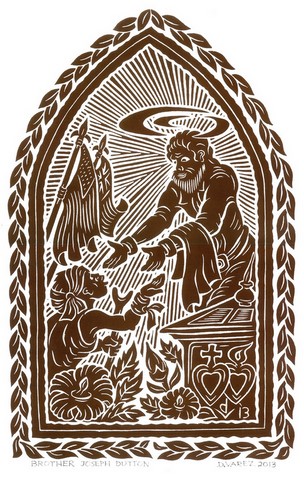 Big Island artist Dietrich Varez, who has created block prints of St. Damien and St. Marianne in his singular bold iconic monochromatic style, has made a new one of a third Kalaupapa hero, “Brother” Joseph Dutton. The civil war veteran and layman from Stowe, Vermont, served Kalauapa patients for the last 45 years of his life, from 1886 to 1931, primarily as a “dresser of sores.” According to Varez, his design includes the American and Hawaiian flags in tribute to Dutton’s patriotism and a desk, pen and paper in recognition of his prolific letter writing. Dutton has been mentioned as Molokai’s third candidate for sainthood, hence the halo, Varez said. (Print by Dietrich Varez)