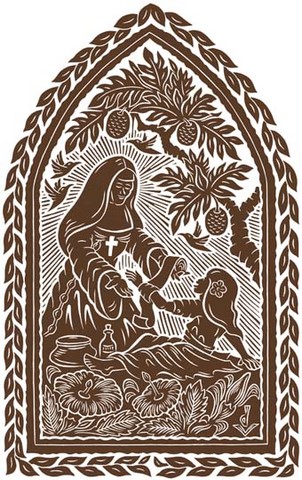 Marianne Cope OSF, also known as Saint Marianne of Molokaʻi, (January 23, 1838 – August 9, 1918) was a German-born American nun who was a member of the Sisters of St Francis of Syracuse, New York, and administrator of its St. Joseph's Hospital in the city.

Known also for her charitable works, in 1883 she relocated with six other Sisters to Hawaiʻi to care for persons suffering Hansen's Disease on the island of Molokaʻi and aid in developing the medical infrastructure in Hawaiʻi.

Despite direct contact with the patients over many years, Cope did not contract the disease.

In 2005, Cope was beatified by Pope Benedict XVI. Cope was declared a saint by the same pope on October 21, 2012, and was the 11th person in  the United States to be canonized by the Catholic Church.

Dietrich Varez has create a special print of Mother Marianne celebrating her.   With our artistic talents we have taken his original block print and made based on it a special amulet that honors and celebrates Saint Marianne.  Varez’ Catholic muse was the late Honolulu-based teacher and writer Sacred Hearts Sister Mary Dolorine Pires who, he said, inspired much of his religious artwork

The first Saint Damien Conference will be held in 2017 in Honolulu.  We will be providing more information and links for your review shortly.  Please mark this page as a favorite and check back soon.

October will be the month of the Saint Damien Conference in Honolulu!